Great Grandma Eulalia Richfield – 1903 – When she had her first picture taken, little Eulalia insisted that they create her own coture. She made the hat out of two burlap sacks and the down from six geese.

Darva Lynne Richfield – 1922 – Married Tony Gianettti eight weeks after she left the convent. The sisters had loved her dearly, in fact, she broke their vow of silence nine times before they finally dismissed her. We Richfield gals sure have a lot to say.

Clara and Cletus Richfield – 1905 – Distant cousins of Great Grandma Eulalia Richfield, the Twins toured the midwest with their trained sheep until an attempted rescue from a steam powered shearing machine went horribly awry.

Great Grandma Eulalia Richfield – 1943 – After her marriage to Robert Lindbaum, there was no doubt who wore the pants in the family. Not only did Bob take on Eulalia’s maiden name, but he sold all his interest in a small motion picture company to buy her imported gowns.

Clara Mae Richfield – 1921 – This photo was taken just two days before her abduction by, and subsequent marriage to, a Shawnee Indian Chief. Clara was the hit of the annual Richfield rodeo. In reverence for her tragedy the rodeo was never held again…

Alphonse and Charmaigne Richfield – 1928 – Infamous for their bathtub gin, Alfi & Char were reckless good-time folks with a penchant for danger. They vanished witthout a trace in a cloud of mystery during a raid just one year after this photo was taken.

Shawnelle Richfield – 1902 – A foundling in the late 1890’s, Shawnelle quickly fit right in with the family. This photo is from the afternoon before the infamous tent revival where she was cured of ther psoriasis and also belssed with an immaculate conception.

Bessie (Richfield) Nousbladt – 1882 – A gaunt and dire woman, Bessie was legendary for her severity and no-nonsense attitude. She died in 1904, insisting that she had invented apple pie!

Club Med Cancun with Atlantis Events
May 1-7
Join me at Club Med, located on a beautiful and roomy peninsula of Cancun, Mexico! More info here!

Rochester, NY
Sat, May 8, at 8 pm
"40 Years On the Throne"
Join me in the new digs of the OFC Creations Theatre!
Buy ticket now!

Pilgrim House in Ptown, MA
May 29 - Sept 18
"40 Years On the Throne"
Join me to celebrate 40 years of professional beauty! Only 63 performances!
Get your tickets Here & Now!

Spring clearance sale on my lovely merch! 50% off everything in April and May. https://shop.bandwear.com/collections/miss-richfield-1981-shop
Happy Easter weekend to all my peeps!!
Just wrapping up Palm Sunday & realizing I need to get my head gear prepared for tomorrow’s Easter Bonnet Bingo. Please join me at playbingobonanza.com
Happy Passover to my Jewish friends. Make sure to floss well after eating your matzo!
Sending love to all my Irish friends! I’d love to participate in the festivities, but corned beef and cabbage makes me gassy
Its time for this beauty queen to get her vaccine! 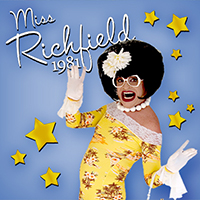