No, my darling prairie dogs, these are sad days in Richfield, as I say farewell to my Cashetta – a fellow performer, wonderful co-worker and sweet, dear girlfriend! She passed away so suddenly in Puerto Vallarta and now I find it so difficult to write memories and go through photos, because it makes it so real and so final!

Cashetta and I first met while we were both working in Provincetown, and immediately we knew we’d been separated at birth. As I recall, we sat at the Wave Bar at the Crown and began to make each other laugh, often at the expense of others!

And so continued a long and hilarious friendship that spanned many shows, at many venues, in many cities across the country.

We also traveled together internationally, the longest trip being a 21-day Atlantis Events cruise in Asia. While there we got into a shoving match with angry tuk tuk drivers in Shanghai, nearly lost our lives with a drunk cabby in Bangkok, and watched a guest toss his cookies at the fish market in Busan, South Korea.

Most tourists would remember a lovely temple or natural wonder, but Cashetta and I would recall such hilarious moments and howl with laughter – even many years later. 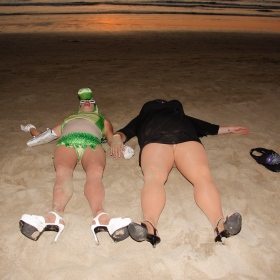 Through the years our paths continued to cross, most recently at the beloved Blue Moon in Rehoboth Beach, DE. It was so exciting to see my dear friend make such a beautiful home for herself, filled with the love of Tim and Randy and the gang at the Moon. In just a few short years, Cashetta became a fixture and favorite with both vacationers and local folks who loved her personality and antics on and off stage, including regular appearances on the beach during the afternoons.

Such dedication and fun was her hallmark. What a sport!

But it wasn’t all laughs with Cashetta and I. There were the serious talks about shows that didn’t go well, pets that died, and the hassles of food for her and alcohol for me! Dark, difficult times made a bit brighter and lighter when shared with someone who knows your heart.

So my last Cashetta memories couldn’t be more appropriate, as my dear friend and I spent time together in Puerto Vallarta attending each other’s shows and taking the city bus to shop at Wal-Mart. 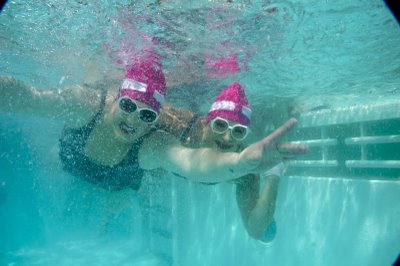 Fortunately the day before I left, we grabbed a last-minute lunch. But our normal 2-hour gabfest was cut short because Cashetta had to hang up her show posters, which were misprinted. So the last vision I have is the two of us giggling at this most obvious and hilarious mistake, knowing it was going to be posted all over town!

What a wonderful last memory. I know she’d think so too!

"Miss Richfield 1981's Guide to a Socially Diseased Holiday"
Dec 5-20, 2020
Join me for a special holiday broadcast from my living room to your heart!
Only 5 performances! So buy your tickets early!
Get your tickets Here & Now!

Play Bingo Bonanza
Every Monday
8 pm ET / 7 pm CT / 5 pm PT
Class up your quarantine and join me for FREE LIVE Bingo! Play along on the Play Bingo Bonanza web page or on my Facebook page! Share a fun hour face-to-face with me!
Click here to learn more and play at PlayBingoBonanza!

The entire Miss R schedule is available on my "Date Book!"