Hello to all my darling prairie dogs!

No words can express my absolute joy on being invited to Washington DC for my very first inaugural! What a treasure to see our country cross two important lines of color: a president who’s black and a first lady who’ll be wearing hues, tints and patterns. I think we’ve all seen enough beige pantsuits over the last 8 years!

My heart pounded patriotically as the Greyhound motored into DC. Then as my white patten-leather platforms stepped on the bus depot platform I saw this gorgeous homo waving frantically as though I might miss him. Yes, the homos had done it again – they’d found a way to make me part of history!

But as my dear friend Bill loaded my steamer trunks and hat boxes onto a city bus to take us to the party, he explained that this was “The InauGAYration Ball” at The Chastleton Ball Room, celebrating the theme: “The End of an Error! The Dawning of a New Era.”

I have no idea what that was all about, but I did adore the music of DJ Tim-E in this swanky condo building with free food and drinks. Rob, Tom, Anthony, and Bill created a lovely evening for about 120 other similarly fashionable gentlemen.

And as always, the homos are so thoughtful, offering a special send-off for our old Prez. Knowing that George W. was going back to Texas, and since most of Texas is like Mexico, they celebrated with a piñata in the shape of GW’s face. Though the homos hit like girls, they whacked that head until it cracked open and candy poured out for everyone to enjoy. 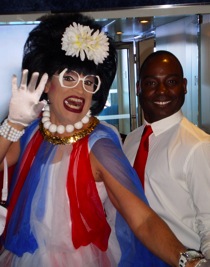 Then after a few songs from me, it was time to throw our shoes at a picture of GW and call it a night. Just then I turned around and there he was! Our new president apparently cared enough to send an official, regulation-sized cardboard cut-out of himself to the party. He definitely looks taller on TV.

But the photo was nothing compared to dancing with him on the Atlantis Events Freedom Cruise about a week later at the end of January. When I asked how he got the time off to go on a homo cruise, the President just gave me a funny look and asked me to lead.

So as Couple #1 in Dancing With The Stars, we danced to the “Ask Not Waltz.” This upbeat, historic number uses JFK’s inaugural speech as a background for a lovely romp in three-four time.

This was not just an exhibition, as our dances were scrutinized and judged by none other than the lovely Pat LuPone! This Broadway babe, who is pictured here, did two amazing shows the night before and then graciously sat in 50-degree temperatures and 35-mile-an-hour winds to offer her professional opinion. 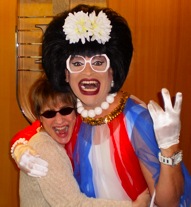 Although appreciated, her complete ignorance of dance became apparent when Pat threw her support to couple #3. This tiny Oriental fellow and his Goliath-like Eastern European partner jumped around the deck in nothing, but gym shorts and tube socks! I’m not sure that either of them even spoke English!

Although I was disappointed, I took the high road and extended an olive branch, offering her some advice, I said: “Pat, if you travel with us more often you might get a chance to dance in the competition next time – no promises!”

XO and one to Jesus!
Miss R

Pilgrim House in Ptown, MA
May 29 - Sept 18
"40 Years On the Throne"
Join me to celebrate 40 years of professional beauty! Only 63 performances!
Get your tickets Here & Now!

Loving my week here at Miches Club Med in the Dominican Republic! The talented & gorgeous staff here entertain the Atlantis Events homos on the beach!
Loved hanging with my Boston Boys at Club Cafe! Thanks Jim, Denis, Frank & Joey!
Come see me in NYC and Boston in October!! Info and tickets at missrichfield.com
No hesitation, join me on vacation with my buddies at Orbitz!!
Heading out in a downpour. Protect that hair no matter what it takes!
Katie Ledecky is a nice lady, but can she do THIS? #olympics #synchronizedswimming